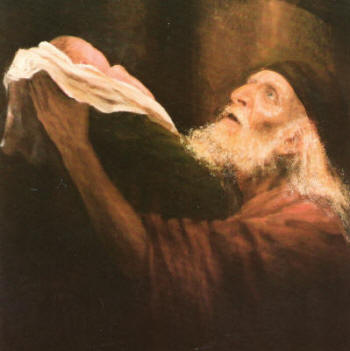 Luke’s Gospel presents aspects of Jesus’ early life that the other three omit. Church tradition holds that Luke interviewed Jesus’ immediate family to gain these details, something we can add to our list of questions we want to ask in eternity!  One of the details he adds to the Christmas narrative is Jesus’ presentation at the temple in vs 22-38 (see below).

We know nothing about Simeon other than that he was a devout man who served at the temple and that God had made him an amazing promise, which was that he would see the Messiah with his own eyes.  But it’s his words that grab our hearts, “Okay God, I’ve seen {believe} your Salvation – for both the Gentiles and for my people – now I can die!”

We don’t know how long he’d lived waiting for that promise, but what we do know is that his life was complete now that the promise was fulfilled.  He was totally at peace.

It’s possible as you are reading this that you aren’t feeling particularly peaceful.  Whether it’s the annual Christmas frenzy or deeper issues that trouble you, I beg you to stop for a minute and see through Simeon’s eyes.  Have you “seen” Jesus? Not just the babe in the manger, but the God/Man who died in your place? Realize, again, that He has made you righteous (2 Cor. 1:21); He has forgiven you forever (Hebrews 10:14); you are already seated in the heavenlies (Ephesians 2:6).  Need I go on? Your cup is totally full! The only gift you, or I, will ever need was in Simeon’s arms 2000 years ago – the rest of life is just the wrapping paper!

25 And behold, there was a man in Jerusalem whose name was Simeon, and this man was just and devout, waiting for the Consolation of Israel, and the Holy Spirit was upon him. 26 And it had been revealed to him by the Holy Spirit that he would not see death before he had seen the Lord’s Christ. 27 So he came by the Spirit into the temple. And when the parents brought in the Child Jesus, to do for Him according to the custom of the law, 28 he took Him up in his arms and blessed God and said:

29 “Lord, now You are letting Your servant depart in peace,

According to Your word;

30 For my eyes have seen Your salvation

31 Which You have prepared before the face of all peoples,

32 A light to bring revelation to the Gentiles,

And the glory of Your people Israel.”

33 And Joseph and His mother marveled at those things which were spoken of Him. 34 Then Simeon blessed them, and said to Mary His mother, “Behold, this Child is destined for the fall and rising of many in Israel, and for a sign which will be spoken against 35 (yes, a sword will pierce through your own soul also), that the thoughts of many hearts may be revealed.”

36 Now there was one, Anna, a prophetess, the daughter of Phanuel, of the tribe of Asher. She was of a great age, and had lived with a husband seven years from her virginity; 37 and this woman was a widow of about eighty-four years, who did not depart from the temple, but served God with fastings and prayers night and day. 38 And coming in that instant she gave thanks to the Lord, and spoke of Him to all those who looked for redemption in Jerusalem.