As I sit to compose this blog on Thursday the 24th, early reports are leaking out of Florida that a building “pancaked” in last night’s storms. Our hearts and prayers go out for the 99 (at this moment) who are still unaccounted for. By the time you read this on Friday, or later, much more may be known and the personal stories may be revealed of both victims and heroes. I trust many will be saved and SAVED.

As I read the initial story, my thought went to the parable in Matthew 7 of the house built on sand. That is, of course, not a condemnation of this particular building, but more of a reassurance that my faith is built on something untouched by any outside circumstances, including a storm big enough to bring down a giant man-made structure. If you are reading this as a believer in Christ, aren’t you glad that your Rock has the power over any storm, whether it be in the sky above or in your own heart? Yet, if you know anything about Florida, this was a storm coming off the ocean, where the biggest storms of all are born and from whence, perhaps, the greatest illustration of our assurance is born!

Have you ever visited a naval dock? Have you ever stood and looked at an anchor? Not one of those two-bit jobs on Uncle Bill’s fishing boat – I mean AN ANCHOR. 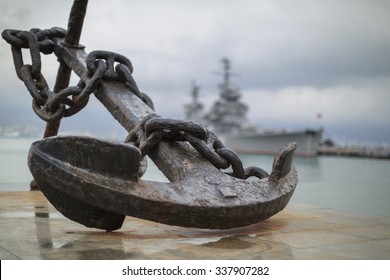 Anchors and their accompanying chains, even in the 1st century, had to be heavy enough to hold the ships to which they were connected. However, a ship that dropped its anchor in a storm might have to drag it for a while until it caught onto something that would hold it, something stronger than the tug of the ship on a storm-tossed sea! Not quite a sure thing. Ships that pulled close to land used a different tactic. They put the anchor on a smaller boat called a forerunner, and sent it to shore with a crew who would anchor it securely, EVEN IN A HURRICANE!

Take a minute right now as you consider whatever storm or storms are beating on your heart. I want you to read this verse aloud, considering every word, keeping in mind Who, in the Hebrew mind (and in truth), is behind that veil!

“This hope we have as an anchor of the soul, a hope both sure and steadfast and one which enters within the veil, where Jesus has entered as a forerunner for us, having become a high priest forever according to the order of Melchizedek.”

Sunday I preached on the parable of the two servants in Matthew 18, the one in which a servant who had been forgiven a GDP-sized debt, then failed to forgive a home mortgage-sized debt.  Afterward someone asked me if we need to forgive someone who hasn’t apologized/repented.  It’s a great question and, biblically, seems to have a two-part answer.

In last week’s sermon I mentioned the principle Jesus taught in the Lord’s Prayer:

Mark has Jesus repeating this teaching while talking about faith in prayer:

“Therefore, I say to you, all things for which you pray and ask, believe that you have received them, and they will be granted to you.  And whenever you stand praying, forgive, if you have anything against anyone, so that your Father who is in heaven will also forgive you for your offenses.”

In both of these passages, Jesus makes no mention of the other party, He just tells us to “forgive” – let it go, send it away!

In a similar vein Paul mentions forgiving others “as Christ has forgiven you,” in both Ephesians 4:32 and Colossians 3:13, as a component of the Christian character that ought to be part of our daily lives.  So yes, on the one hand, I must forgive my brother or sister regardless of apology so as to be in fellowship with my Father in heaven above.

The parable in Matthew 18, concerning the two servants, is preceded by a discussion about what to do when a brother sins against you.  Jesus instructs us to go to him privately and try to get him to hear us (18:15).  Should the result of this meeting be one of refusal to hear (apologize, agree, repent), then there are a series of steps, the final one of which is excommunication.  We see these steps played out, sometimes rather drastically, in the early church. So we know God is serious.  I do understand the root of the question, that being that sins which are obvious to us ought to be obvious to the sinner.  However, in this teaching we who are offended are instructed to initiate.  If we don’t think the offense rises to the level of confrontation or if we are too hesitant to confront, then forgiveness is our only other option.

All that said, conditional forgiveness is a “thing,” but it’s an infrequent thing in our lives compared to how often hurts are never confronted and, therefore, just need to be “let go” because they only damage the one holding on to them, not the one we are holding them against, as much as we like to imagine otherwise!

Yours, Because I’m His,

“Do you solemnly swear that you will tell the truth, the whole truth, and nothing but the truth, so help you God?”

Most of us have heard those words dozens of times on “Perry Mason” or “Law and Order.”  Not many of us hear those words in person. I’m almost at the end of my sixth decade, and I’ve never been asked that question! During the first 245 years of America it’s been a safe bet that if you keep your nose clean, you’ll not stand before a judge…. But times they are a’changin’ my friends! The truth we are mandated, by The Highest Authority, to proclaim may very soon become illegal, at which time some of us could end up being asked those words, which leads us to the question:

“Again, you have heard that the ancients were told, ‘You shall not make false vows, but shall fulfill your vows to the Lord.’ But I say to you, take no oath at all, neither by heaven, for it is the throne of God, nor by the earth, for it is the footstool of His feet, nor by Jerusalem, for it is the city of the great King. Nor shall you take an oath by your head, for you cannot make a single hair white or black. But make sure your statement is, ‘Yes, yes’ or ‘No, no’; anything beyond these is of evil origin.

Clearly, Jesus wants us to be people of our word.  Clearly He does not want us to frivolously be swearing that we will keep some promise or fulfill some obligation.  Remember, “Cross my heart, hope to die, stick a needle in my eye?” But did He forbid us from swearing to His name in court?

If all He ever said was here in chapter 5, it certainly would seem that way. Fortunately for us, the issue Jesus was confronting wasn’t so much seriously binding court testimony as it was a practice scholars today call “casuistry,” which was an elaborate hierarchy of things by which to “swear.” He brings it up again in Matthew 23 and, in that series of woes, He deconstructs their hierarchy and says in the end that all oaths are to God and God alone. While it doesn’t leave the reader feeling warm and fuzzy, it does leave one feeling that in a very formal setting (i.e., a court of law) swearing an oath to God is acceptable. That said, it’s not to be part of our everyday life!

I love to collect stories that illustrate spiritual truths.  Often I even go so far as to print them out and bring them to the pulpit with me, but for whatever reason, that’s as far as I get.  Here are two I really wish I had read this past Sunday as we dealt with self-righteousness (a.k.a., thinking too much of myself).  Pastor Scott

On a visit to the Beethoven museum in Bonn, a young American student became fascinated by the piano on which Beethoven had composed some of his greatest works. She asked the museum guard if she could play a few bars on it; she accompanied the request with a lavish tip, and the guard agreed. The girl went to the piano and tinkled out the opening of the Moonlight Sonata. As she was leaving she said to the guard, “I suppose all the great pianists who come here want to play on that piano.”

The guard shook his head. “Padarewski, Poland’s Maestro was here a few years ago and he said he wasn’t worthy to touch it.”

I am the least of the apostles. 1 Corinthians 15:9

I am the very least of all the saints. Ephesians 3:8

Humility and a passion for praise are a pair of characteristics which together indicate growth in grace. The Bible is full of self-humbling (man bowing down before God) and doxology (man giving praise to God). The healthy heart is one that bows down in humility and rises in praise and adoration. The Psalms strike both these notes again and again. So too, Paul in his letters both articulates humility and breaks into doxology. Look at his three descriptions of himself quoted above, dating respectively from around A.D. 59, 63, and 64. As the years pass he goes lower; he grows downward! And as his self-esteem sinks, so his rapture of praise and adoration for the God who so wonderfully saved him rises.

Undoubtedly, learning to praise God at all times for all that is good is a mark that we are growing in grace. One of my predecessors in my first parochial appointment died exceedingly painfully of cancer. But between fearful bouts of agony, in which he had to stuff his mouth with bedclothes to avoid biting his tongue, he would say aloud over and over again: “I will bless the Lord at all times; his praise shall continually be in my mouth” (Ps. 34:1). That was a passion for praise asserting itself in the most poignant extremity imaginable.

Cultivate humility and a passion for praise if you want to grow in grace.