I heard a very catchy version of the 12-days of Christmas earlier this week and it caused me to remember a paper I seen during a previous Christmas season that purports to give an explanation for the song.  I can’t vouch for the veracity of this explanation; but as you will no doubt hear it a dozen more times this season – maybe this explanation will help give an otherwise frivolous song a little more gravitas!  Merry Christmas – Pastor Scott

From 1558 until 1829, Roman Catholics in England were not permitted to practice their faith openly. Someone during that era wrote this carol as a catechism song for young Catholics. It has two levels of meaning: the surface meaning plus a hidden meaning known only to members of their church. Each element in the carol has a code word for a religious reality which the children could remember.

-The partridge in a pear tree was Jesus Christ.
-Two turtle doves were the Old and New Testaments.
-Three French hens stood for faith, hope and love.
-The four calling birds were the four gospels of Matthew, Mark, Luke & John.
-The five golden rings recalled the Torah or Law, the first five books of the Old Testament.
-The six geese a-laying stood for the six days of creation.
-Seven swans a-swimming represented the sevenfold gifts of the Holy Spirit–Prophesy, Serving, Teaching, Exhortation, Contribution, Leadership, and Mercy.
-The eight maids a-milking were the eight beatitudes.
-Nine ladies dancing were the nine fruits of the Holy Spirit–Love, Joy, Peace, Patience, Kindness, Goodness, Faithfulness, Gentleness, and Self Control.
-The ten lords a-leaping were the ten commandments.
-The eleven pipers piping stood for the eleven faithful disciples.
-The twelve drummers drumming symbolized the twelve points of belief in the Apostles’ Creed 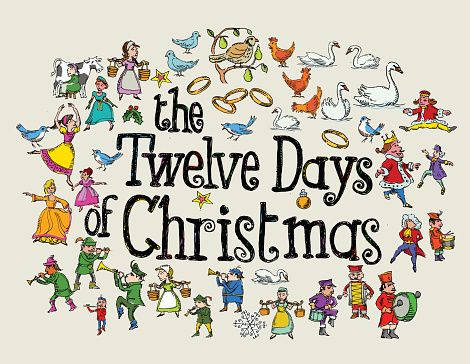