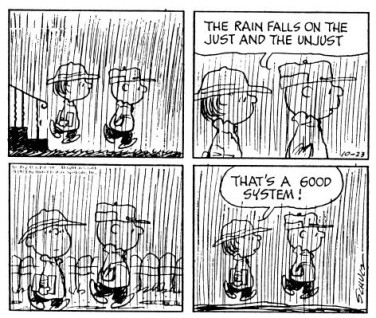 According to a traditional Hebrew story, Abraham was sitting outside his tent one evening when he saw an old man, weary from age and journey, coming toward him. Abraham rushed out, greeted him, and then invited him into his tent. There he washed the old man’s feet and gave him food and drink.

The old man immediately began eating without saying any prayer or blessing. So Abraham asked him, “Don’t you worship God?”

The old traveler replied, “I worship fire only and reverence no other god.”

When he heard this, Abraham became incensed, grabbed the old man by the shoulders, and threw him out his his tent into the cold night air.

When the old man had departed, God called to his friend Abraham and asked where the stranger was. Abraham replied, “I forced him out because he did not worship you.”

God answered, “I have suffered him these eighty years although he dishonors me. Could you not endure him one night?”